Jon Pedder from Sierra Madre SAR just released a version of MapSAR that will work on ArcGIS Desktop 10.2. MapSAR for 10.2 will be posted to www.mapsar.net ASAP but it is also available for download from ArcGIS Online from the WiSAR Applications Group. 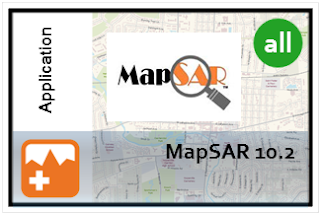 For those of you interested in contributing to the MapSAR Project by testing the template or developing tools, please see the MapSAR GitHub repository.

The goal of MapSAR is to help:


If you are unsure if you have access to ArcGIS Software and work on a volunteer SAR Team please see the Esri Non-Profit Organization Program. If you feel you may not qualify for this program please send an email to help@mapsar.net. Free training videos are also available on the NAPSG YouTube channel.

Great work Jon and Team for getting this version out!


***Update - I just updated the item page for downloading MapSAR 10.2, apparently some tools did not zip up. Also, this version can be used for 10.1 as well.

Posted by Paul Doherty at 10:15 AM No comments:


Thank you NAPSG for all of your support! 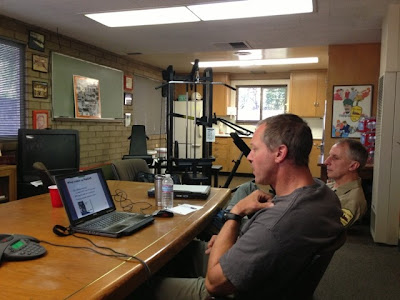 NAPSG will make the training videos available (www.youtube.com/user/napsggis)
and I will announce the location here. For those of you assisting with the flood response in
Colorado - please be safe and let us know if you need our help.

UPDATE: If you missed the event or want a recap - the slides and video are posted here:
http://www.napsgfoundation.org/blog/news/147-mapsar-virtual-training

Posted by Paul Doherty at 9:18 AM No comments:


An incredible amount of rainfall in the State of Colorado has led to flash flooding, evacuations, and unfortunately, the loss of life. I have embedded a flood monitoring map here below which is produced by the Esri Disaster Response Program (Disaster Assistance for GIS and Mapping). You can go this website and embed a similar map yourself by using the "Link" Button.

Another great resource for maps and information for weather in the Denver Area is Brendan's Weather Blog. He produced this next map and I encourage you to check out his site. From his blog:

"CoCoRaHS is an excellent non-profit community based network of volunteers collecting rain, hail, and snow data. The data is used widely across multiple agencies from the National Weather Service to city organizers. Please visit their site if you are interested in getting involved.
Here are three day totals from CoCoRaHS observers in Colorado. Anywhere from .5" to 10" being reported since Monday, with many 6"+ reports from the Boulder flood region."


If need maps for your area, check in the Gallery below.

Finally, this map below is a Story Map, which highlights the different regions and perspectives regarding this flooding incident. You can access the interactive map on the Esri Disaster Response Program website. 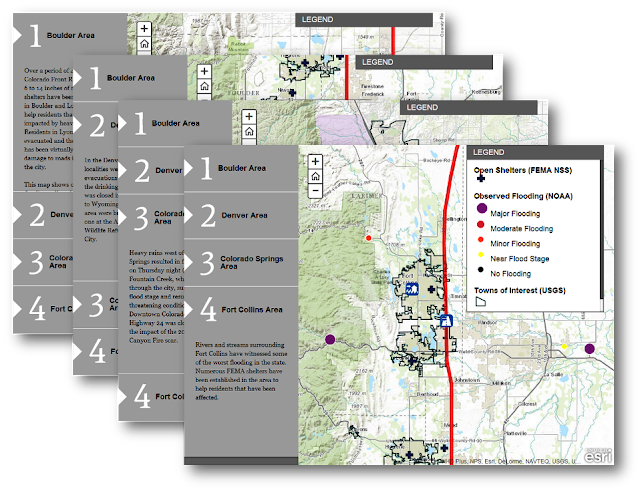 For more information try these websites


Posted by Paul Doherty at 6:16 AM No comments:

Wilderness search and rescue is understood to be an inherently spatial problem which is relative to both the subject and searcher.  From the standpoint of the subject, many decisions that are made before and after becoming lost or injured are influenced by the terrain and the environment.  These decisions may be either conscious (active) or sub-conscious (passive), and in many ways are driven by both time and space.  In WiSAR related to lost persons, it is the decisions that were made by the subject that resulted in them becoming lost.  Studies on lost person behavior have allowed searchers to categorize individuals that exhibit similar behaviors when they become lost.  These categorical behaviors are observed by plotting Initial Planning Points (Point Last Seen or Last Known Point) and Find locations then extracting information about the terrain and observing trends in the data.  When combined with a critical analysis on the influence of terrain and environment (T & E) on a specific individual, geospatial trends in lost person behavior provide valuable information that could reduce the time taken to locate a lost subject. 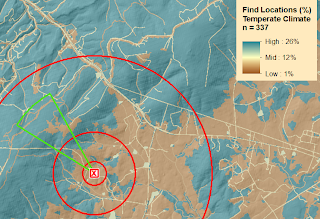 Integrated Geospatial Tools for Search and Rescue (IGT4SAR) is a dynamic tool developed to take advantage of using Geographic Information Systems to model lost person behavior and provide a critical analysis on the influence of T & E.  The primary advantage of a GIS is that it allows a user to interact with spatial data and even create new data from existing information, for example estimating cellular coverage across the search area using a digital elevation model and cell tower attributes.  No more is a search analyst limited to extracting information from a printed, topographical map that is most likely outdated.

WiSAR operations that involve a lost subject are plagued with uncertainty.  Where did the subject leave the trail, or is the object found by a search team an actual clue related to the lost subject?  In order to deal with the cognitive complexity of all this uncertainty search analysts often resort to developing scenarios, or hypotheses, to describe what is believed to have happened to the lost subject.  These scenarios provide justification for applying resources to specific geographical locations.  This is critical as lost person searches often cover large geographical areas and have few resources with which to search.  Thus a method is required to assist in prioritizing the search area otherwise the search effort is limited to merely purposeful wandering which is typically less effective than targeted searching.  Among other functions, GIS allows analysts a way to “play-out” various scenarios to determine what is possible and likely. 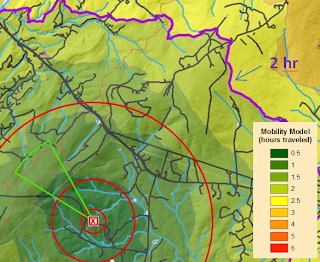 Several Lost Person Behavioral models are built directly into IGT4SAR, for example using data provided in Robert Koester’s text on Lost Person Behavior, concentric rings are automatically drawn around the IPP based on subject category that represent the recorded distances to find locations of similar individuals.  Similarly, a Track Offset Model provides a visual representation of how far from a linear feature such as a trail or road in which the subject was found.  The Find Locations tool provides a means of re-classifying spatial data such as roads, trails and hydrology vector data along with a land cover surface raster to display the typical types of features where similar subject were found.

Expanding on the concept of reclassifying raster data, a similar approach is used to create a Least Cost Path Surface that represent the potential subject mobility, or distance travelled, over a period of time.  This model takes terrain features such as slope, access to travel aides (roads, trails, etc) and barriers (bodies of water) along with land cover to estimate how far a subject could have traveled over a given period of time.  Analysis of historical data from Yosemite National Park suggested subjects (predominately hiker category) did not travel more than 1.5 hours walking distance from the IPP.  Know this information could drastically reduce your search area. See Jared Doke's MS Thesis for more on this study. 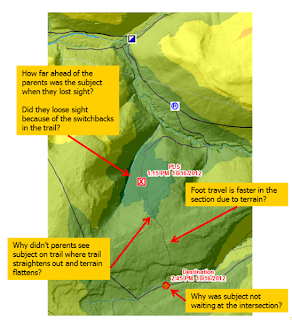 Combining these estimates together with specific information you know about the subject and the local T & E, an analyst can “play-out” various scenarios to see what makes sense and assist is assigning a probability of most likely occurrence to the various regions.   This ultimately leads to a Probability Density plot of the search area.   While assigning numerical values in the form of Probability to various regions of the search area may be slightly misleading as it gives the impression that a rigorous quanitfied analysis has been done as opposed to the qualified (Bayesian) analysis, the numerical values allow for easier tracking of progress within the search area in the form of Probability of Detection and Probability of Success.  While to some this may sound complex, GIS is well equipped for handling these types of analysis and these concepts are built into the functionality of IGT4SAR.

To learn more about Integrated Geospatial Tools for Search and Rescue (IGT4SAR) and for using GIS for critical analysis and planning of lost person incidents subscribe to the YouTube videos at: 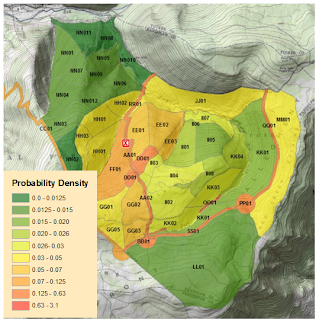 If you have development skills or are a GIS Specialist and would like to test these tools please see the GitHub Repo: https://github.com/dferguso/MapSAR_Ex

From AFAC2013 - This has been a great trip to Australia and we are not done yet. I just wanted to give an update on the agencies interested in MapSAR and IGT4SAR and the new friends that will be joining the SARGIS Discussion Group.

On Friday I will be at Ozri 2013 and next week meeting with the Queensland Police about MapSAR and training opportunities for SARGIS. I would like to thank everyone for their hospitality and please welcome our newest discussion group members.

See my Story Map for an interactive tour. 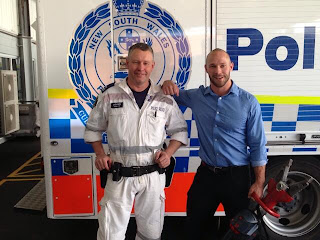 Posted by Paul Doherty at 11:45 PM No comments:

Download the free MapSAR template and get started with free training